I wrote this piece about 8 months ago for another website I was writing for at the time (www.grogsociety.com). Since we have a Sour Beer class coming up at The Bruery Provisions on August 13th(Stop by or email Provisions for more details) I thought this would be a good time to resurrect it for The Bruery blog. Of course you could also be cynical about the damn thing and call me lazy for rehashing stuff. You would also be right…and not my favorite person.
The Power of Sour: The Emergence of Modern Sour Beers
When I was 11 or 12 I considered myself a candy connoisseur. My appetite for those treats in the grocery-checkout lane was rarely sated. Always on the hunt for the next great sugar high, I found in my hand one day a bag of Warheads. (For the uninitiated, Warheads were superlatively sour bite-sized pieces of tooth torture.) I popped the first one into my mouth. My lips puckered and my tongue began to drown in cleansing saliva. I was hooked. From that day forward, I sought only the sourest of sour candies: lemon drops, candy straws, and gumballs that seemed to resemble miniature Death-Stars made solely of citric acid. I couldn’t get enough of that teeth-rotting goodness, but it was never sour enough. My friends and I searched relentlessly for something that would take tartness to the next level. We wanted pleasure and pain, the pre-adolescent equivalent to the type of jack-assery that ensues when you combine a nose, a straw, and wasabi.
My wife may dispute this point, but I am an adult now. My candy intake is strictly monitored. The sour candy indiscretions of my youth are long behind me. “Sellout!”, you say? No, I’ve just found new ways to get my fix. Sour candy youth transplants often veer towards the hot-sauce craze when they grow older, and I can certainly count myself amongst the capsaicin acolytes, but the object of my youthful obsession has been reincarnated in Belgian-style sour beers. Belgian lambics, Flanders reds and browns, and now a number of American breweries have thrown their barrels into that ring. It’s a great time to be a sour beer lover.
That First Taste 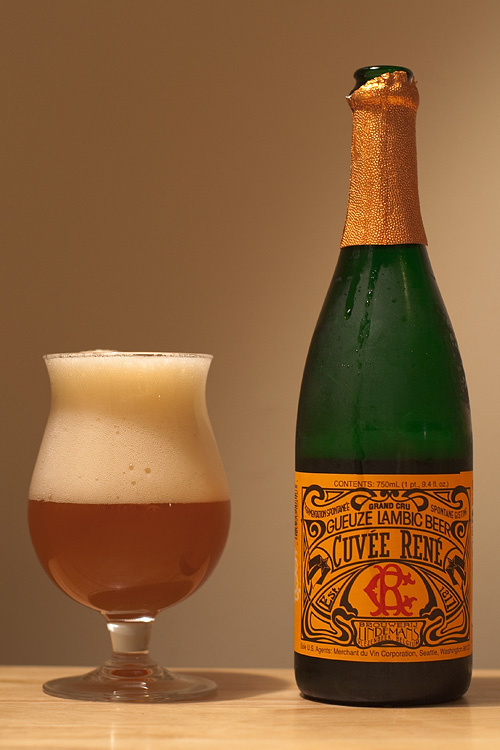 I encountered my first true sour ale about 7 years ago on trip to Chicago. I was a few years into my switch from big-brew swiller to microbrew maven when I came across a bottle of Lindeman’s Gueuze Cuvée René. I had heard of said beer through various outlets, and most of the reviews had been complimentary though a bit esoteric. The common aroma descriptors at the time were “barnyard”, “horse blanket”, and “sweat”, usually followed by acclaim and elitist caveats to the effect of “Not for the faint of heart.” Well, brew-love bravado brought out my wallet and I purchased the bottle for consumption later that night. I popped the cork with an air of sophistication and poured glasses for my two friends. We smelled. We sipped. They spit. I choked it down fast enough to feign an appreciative grin. It was one of those moments when I thought, “I should like this, but I don’t.” Further research led me to the conclusion that, like brussels sprouts, sour beer was an acquired taste. This concerned me. Despite my parents’ best intentions and dinner table ruses, I still can’t stand sprouts of any kind. All the same, I was determined to understand what the sour ale hubbub was about.
Fast-forward a few years. I was in Belgium on vacation with some friends, spending a few days in Antwerp. My knowledge of all things beery had led us to a hidden gem of a pub called The Kulminator. We sat down in the back patio encircled by crumbling stone walls and about a dozen stray cats. Our server was an affable old Flemish woman who spoke very little English. She quietly brought out the beer menu, a compendium of more than 500 beers, mostly Belgian and nearly half vintage-dated. Like any good beer geek, I had done my homework. I promptly went for Boon’s Framboise, a 3-year-old bottle of Belgian lambic sour beer aged with raspberries. Some minutes later, my anticipation was rewarded with a dusty bottle laid down in a small wicker basket. Our server poured us all a glass. I felt a thrill of trepidation. “Here we go again,” I thought. “Once more into the breach.” And there it was: the sight, the smell, and then the taste. Euphoria in my mouth and eureka in my mind, that bottle of lambic became a revelation. The aroma was laden with earthy notes, lactic sourness, and red fruit tones. The taste was light and lactic with a spritzy carbonation that cleansed a palate clamoring for more. I had found a new obsession.
Make no mistake—these beers are complex. Indeed, if you’ve been searching for a beer to put your faculties of smell and taste through a sensory decathlon, look no further. Depending on the sub-style you imbibe, you may encounter smells of raisins, dark fruit, apples, hay, horse blanket, honey, cherries, plums, raspberries, vanilla, cedar and more, all encased in a firm lactic sourness that can be subdued or brazen. Put the glass to your lips and tip it back. Those aromas become flavors coupled with perhaps a little caramel, toffee, maltiness, or citrus. Hopheads should check the lupulin madness at the door. With few exceptions, hop aroma and bitterness are virtually nonexistent in these beers. The acidity gives the balance that the hops would otherwise provide. These tend to be very refreshing beers, though some modern interpretations are a bit heavier. Most commercial examples are of moderate strength, and rarely will you see a sour ale go beyond 8% abv, though I’ve seen a number of newer beers in stronger territory.
Bugs in my beer…
Even if you’ve never tried sour ales, you’ve probably seen them. These curiosities on the shop shelves and bottle bars, their labels bearing strange names and unfamiliar words, are often passed over due to their seemingly odd nature and the high price tag so many of them command. Why are sour ales so bizarre, and why should you be willing to fork over your hard-earned scratch for them? It’s all in how they’re made.

We make quite a number of sour ales here at The Bruery, however this one is currently one of my favorites. This is our version of a Belgian-style Kriek. It’s perfectly funky with a pleasing sourness and expressive cherry flavors. Find a bottle fast before they’re all gone.
Temptation (Russian River Brewing; 7.25% abv)
Vinnie Cilurzo has been at the forefront of the American wild ale scene for several years now with his line of barrel aged beauties. Temptation is a Belgian style blonde aged for 12 months in Chardonnay barrels with Brettanomyces. This beer showcases a lovely tartness with plenty of oak and fruit to back it up.
Kriek (Brouwerij Cantillon; 5% abv)
Cantillon is one of the most prominent producers of traditional lambic beers coming out of Belgium. Hunt down anything with their name on the bottle, but this one in particular is a real treasure. Earthy, musty, and sour wrap around subtle cherry and red fruit flavors. This is the real deal.
Rodenbach Grand Cru (Brouwerij Rodenbach; 6%abv)
Sour ale lovers would hunt me down and drown me in a vat of Bud Lite if I didn’t mention this beer. This is a great example of the Flanders Red style from Belgium. Aged for nearly 2 years in oak tuns, this is a beer designed for quiet contemplation. Tart cherry and vanilla give way to a background of malty sweetness. Truly classic.
La Folie (New Belgium Brewing; 6% abv)
New Belgium Brewing was lucky enough to steal Peter Bouckaert away from Rodenbach several years ago and it’s a good thing too. Bouckaert is a God in the sour beer world of Odin like proportions, but this beer feels more of a Loki-like effort for all its mischievousness. Sour apple, oak, dark fruits and a hint of Brett: What’s not to love?
Kriek Ale (Cascade Brewing; 7.3% abv)
For my money, these guys are some of the most creative producers of American sour beers. The logo on their T-shirts even reads “House of Sour” so you know what you’re in for here. Their Kriek spends over 6 months in oak with their own special strain of Lactobacillus. This is an intensely sour beer with gorgeous cherry aromas and a hint of cherry pie crust in the mouth.

The post Our Wood Cellarman’s take on Sour Ales appeared first on The Bruery.